Check out RenewaBoiler, the heat pump for radiators.

2040 Energy is electrifying home heating. Here's why and how.

Climate change is an existential crisis for human civilization. The latest IPCCC report, the continual rise in global temperature, and the ever-increasing frequency of floods, forest fires, and hurricanes make it clear that we need to take action. 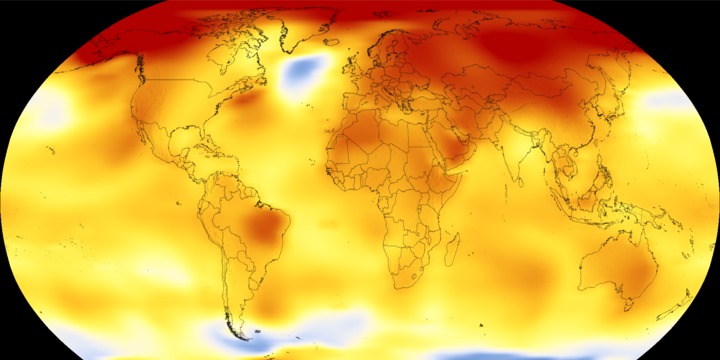 Global warming is happening before our eyes.

The electricity industry is making remarkable progress, and now it is time “electrify” other fossil-fuel-dependent sectors so they can run on clean wind and solar power. Here in the Upper Midwest, we use a huge amount of fossil fuels for heating our buildings and our water. We have the technology to convert space and water heating to electricity, but we are making very little progress.

Natural gas is an utter disaster for the climate.

Space and water heating in Minnesota is dominated by natural gas. Ironically, natural gas is widely advertised as “clean-burning”, and has historically been promoted by environmentalists as the greenest way to heat your home. And indeed, natural gas is cleaner than petroleum-based alternatives. But it’s still a terrible choice for the climate.

We’ve known for a very long time that burning fossil fuels for heat emits a lot of CO2. And in a cold climate like Minnesota, this is a major problem. The state Pollution Control Agency found in 2014 that residential heating causes even more greenhouse emissions than passenger cars. 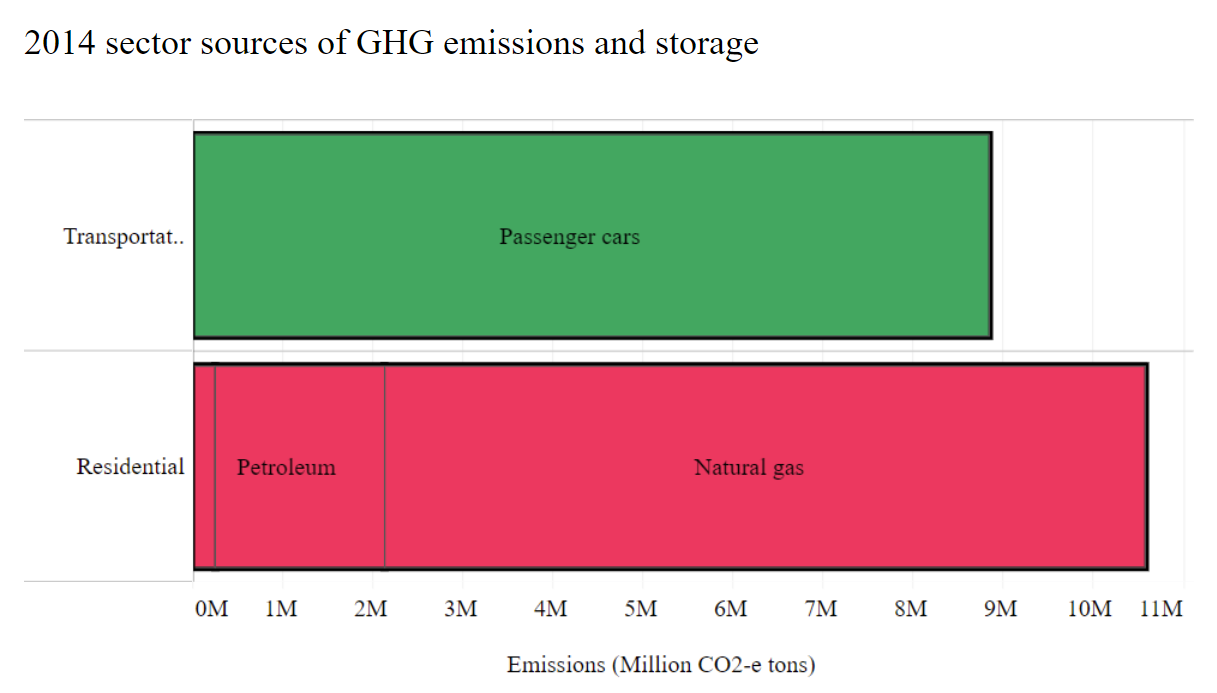 At an individual level, the climate effect of heating fuel is even more pronounced. For example, if you’re burning the state average of 900 therms/year, that’s equivalent to 540 gallons of gasoline: 16,200 miles for a typical 30mpg sedan, or 27,000 miles for a Prius!

And when it comes to natural gas, CO2 isn’t the only problem…

Recently, scientists are becoming more concerned about the climate impact of methane (the chemical name for natural gas). Methane is a far more potent greenhouse gas than CO2, though it decays in the atmosphere relatively quickly. A leading cause of methane emissions is natural gas leaks during extraction, storage, and distribution.

The way that scientists account for different greenhouse gases is by determing a Global Warming Potential (GWP), which measure the greenhouse potency of a gas, relative to CO2, over a specific timeframe. The EPA and other agencies have historically used a GWP value for methane of 25, which was the 2007 international standard for methane’s GWP over 100 years. Updated standards were published in 2013, with a higher 100-year methane GWP of 36. And as the real effects of climate change are beginning to materialize, many scientists believe it’s more appropriate to use the 20-year GWP – which is a significantly higher value of 86 (or 72 in the 2007 standard).

Furthermore, a recent study from the Environmental Defense Fund has found that the EPA may be underestimating the amount of methane leaks by 60%.

What does all this mean in practice? I’ll spare you the math, but the gist of it is that the overall climate impact of natural gas heating could be nearly 70% higher than the CO2 emissions alone. So that state-average natural gas bill would be like driving the preposterous 12-MPG Hummer H2 for 11,000 miles per year. 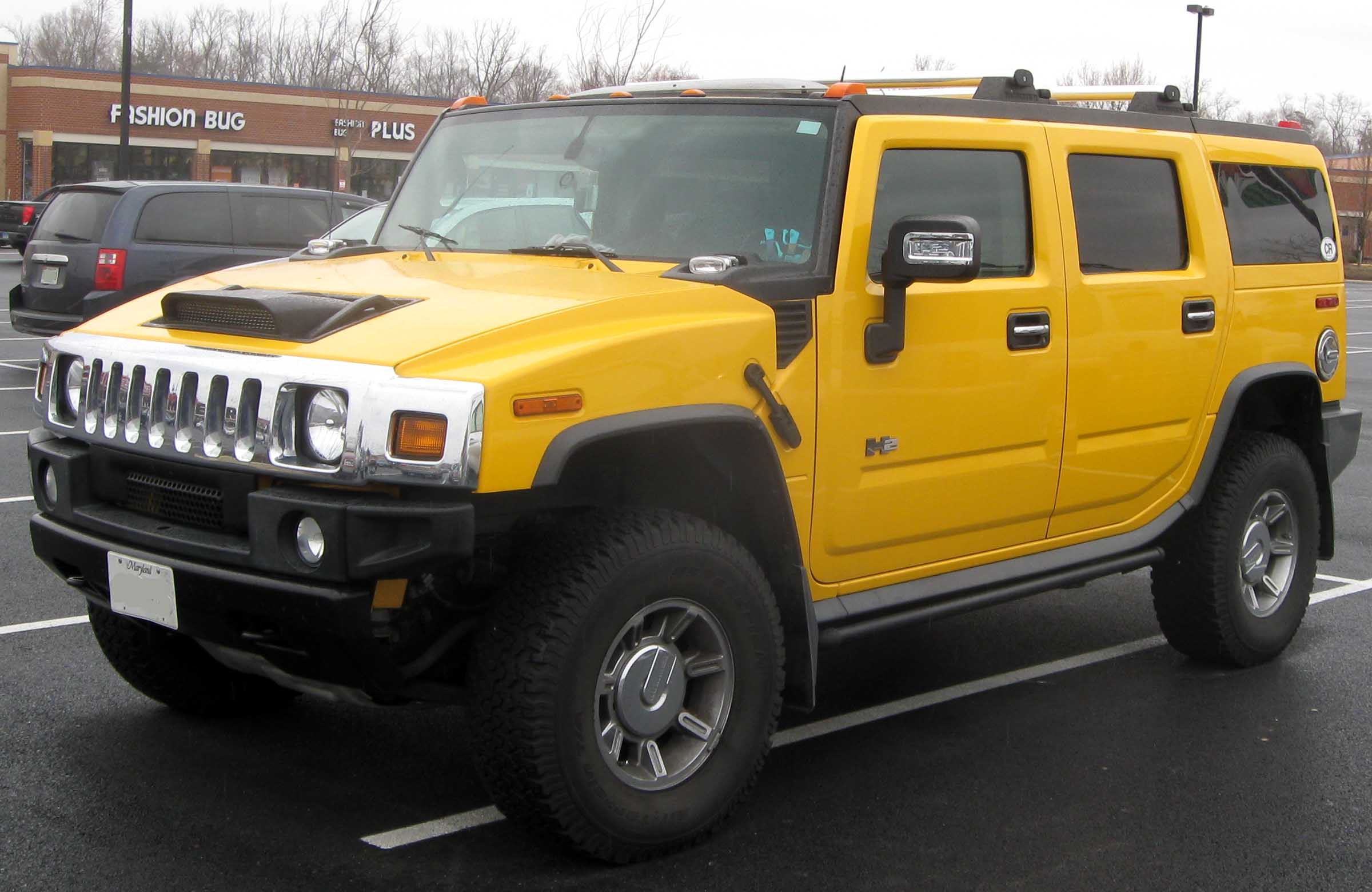 Advances in technology have made electric heat much cleaner.

One reason that climate advocates have traditionally supported natural gas is that old-fashioned electric heat is even worse. Coal-generated electricity powering baseboard heaters emits a huge amount of CO2 (and other nasty pollutants). But modern electric heating technology is far more efficient than baseboard units, and the modern electric grid is much cleaner than it used to be.

Traditional heat sources like baseboard heat, electric boilers, and space heaters use electricity to generate resistance heat. They work by running electric current through material that directly converts the electricity into heat – just like a toaster or a hair dryer. This simple conversion of energy creates 1 unit of heat per unit of electricity.

An air-source heat pump can create 2-4 units of heat per unit of electricity, depending on the outside temperature. Rather than converting electricity directly into heat, it uses the electricity to “pump” heat from the cold air outside into the home. (An air conditioner does the exact opposite process, pumping heat from the cool home into the hot air outside. So a heat pump is just an air conditioner that can run in reverse!)

The heat pump’s ratio of heat added to energy consumed is called the “Coefficient of Performance” (abbreviated COP). The challenge is that COP (and thus the total heating capacity) drops as the outside temperature gets colder – which is exactly when the home needs more heat! This means that in a very cold climate like Minnesota, heat pumps require a backup heat source, and are less efficient than in milder regions. 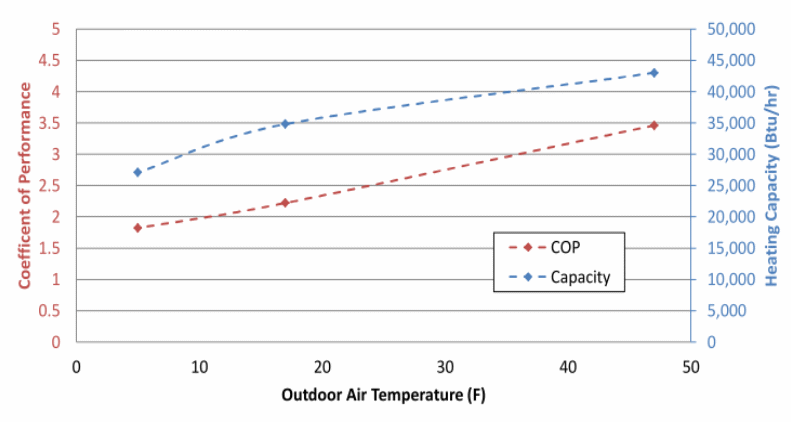 The COP and capacity of a heat pump relative to outdoor temperature.
(from "Cold Climate Air Source Heat Pump", Minnesota Department of Commerce)

Despite this requirement for backup, heat pumps provide a massive efficiency improvement. A recent study found that a heat pump can cut the amount of electricity required to heat a Minnesota home by more than 50% – even when using baseboard heat as backup. And technology advances continue to make heat pumps more efficient and more effective in cold weather.

The most (only?) encouraging sign in the fight against climate change is the rapid adoption of clean electricity. Ten years ago, the grid was dominated by coal and renewables were a fringe contributor. Since then, coal generation has dropped by nearly half, and solar and wind combine for 7% of the USA’s electricity. Certain areas have done even better: solar and wind generate approximately 20% of electricity state-wide in California and for Xcel Energy in the Upper Midwest.

These trends are expected to continue or accelerate:

This shift from coal to renewables is massively lowering the greenhouse emissions per unit of electricity: 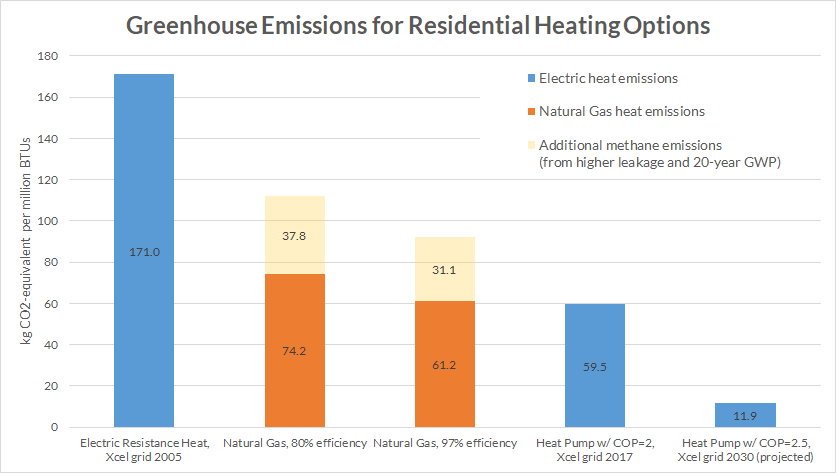 Take another look at that graph! There are a couple of really important takeaways:

And of course, some customers get energy that is even cleaner than the power grid, by installing solar panels on their own roof or subscribing to a renewable energy program.

This graph represents the entire reason that 2040 Energy exists. Our company goal is to bring heat pump technology to the masses; to keep everybody’s home warm while keeping the planet cool.

Electrified heating isn’t cost-competitive today…but it will be soon.

Only the most extreme green-heads will pay a premium to lower their heating emissions. For electrified heating to succeed, it must out-compete natural gas on cost. And that’s not the case today (in cold climates, anyway).

Consider the Minnesota-average home spending $700 over the winter on natural gas heating. That same heat output through a heat pump system with resistance backup would cost around $1,300 – nearly twice as much! This is a huge barrier to electrified heating.

Fortunately there are some ways to make it cheaper.

A major challenge for electric utilities is that they must maintain equal supply and demand on the grid in real time. Demand fluctuates throughout the day (and season), and recently wind and solar power have added variability on the supply side as well. This means that if customers are able to use electricity at an opportune “off-peak” time, it’s much cheaper for the utility – and they will pass on some of those savings. 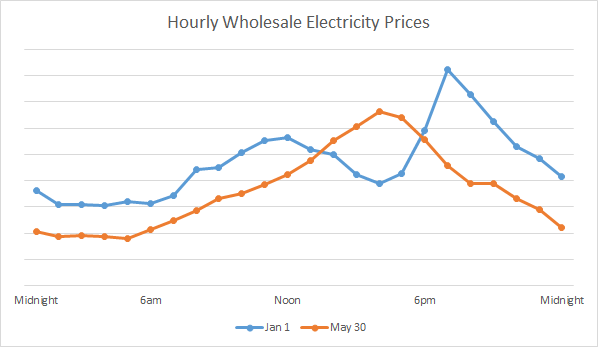 For the utility, the price of electricity varies by the hour and season.

A electric heating and cooling system can take advantage of low off-peak prices by using Thermal Energy Storage (TES): heating (or cooling) a large mass when electricity is cheap, then later extracting that heat (or cool) when electricity is expensive. TES is simple and inexpensive – in fact, most American homes already have a thermal storage unit, in the form of their hot water heater tank! And that hot water tank stores energy for 10-20% of the price of a lithium-ion battery. <!– 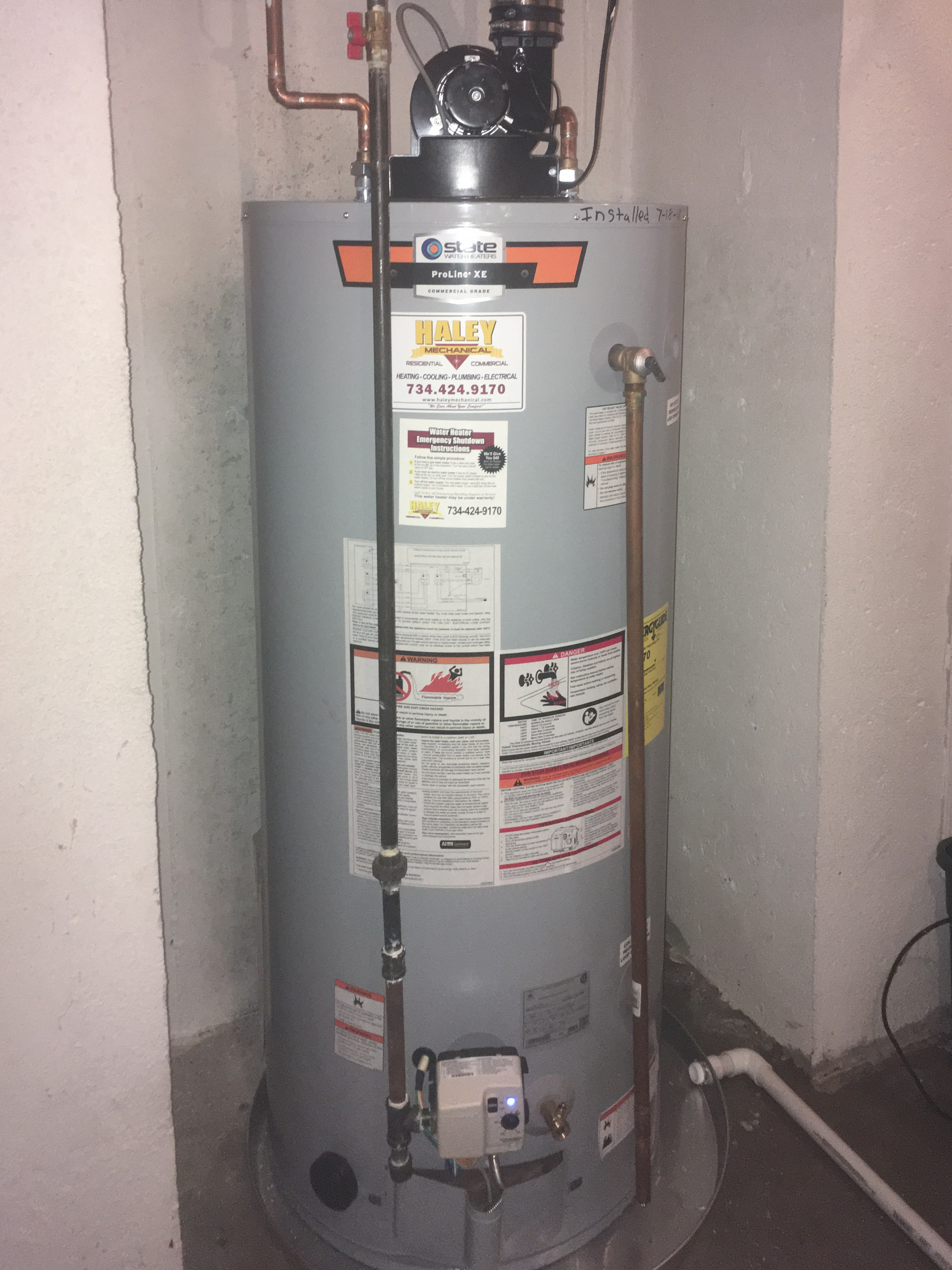 Another advantage of TES is that it can be “charged” when the heat pump is most efficient, which is when the outdoor temperature is less extreme. In the summer, this coincides nicely with off-peak electricity rates, since it will be coolest outside at night. There’s no such synergy during the winter, but running the heat pump during the day can provide a massive efficiency boost if it means avoiding backup resistance heat.

Normally, an air conditioner extracts heat from the home and sends it outside as waste heat. But it’s possible to use that heat instead, and gain (nearly-)free water heating during the cooling season. And in some climates, it’s common to have days that require heating in the early morning and cooling in the evening – so a system with TES can use the waste heat of the cooling to charge the TES for heating (or vice versa).

Electric heat has a host of other benefits that aren’t directly related to cost:

When you add up all these advantages with the potential cost savings of thermal energy storage, electrified heating can easily compete with natural gas on economics.

2040 Energy is developing the cleanest, smartest, and most comfortable heating system on the planet – and it runs on 100% electricity. If you’re interested in converting your fossil-fuel heating system to run on low-carbon electric power, get in touch with us today. Or, if you’d like to contact us for any reason at all, shoot us an email at [email protected].

Next: Full Speed Ahead!.

We are building RenewaBoiler — the first cold-climate heat pump designed for hot water radiators. Product release is targeted for late 2023.

Stay in the Loop

RenewaBoiler is scheduled for release in late 2023. To keep up with our progress, sign up for email updates below. (We promise to respect your inbox!)