Check out RenewaBoiler, the heat pump for radiators.

This one amazing device can dramatically reduce the cost of our heat pump, while increasing its efficiency. 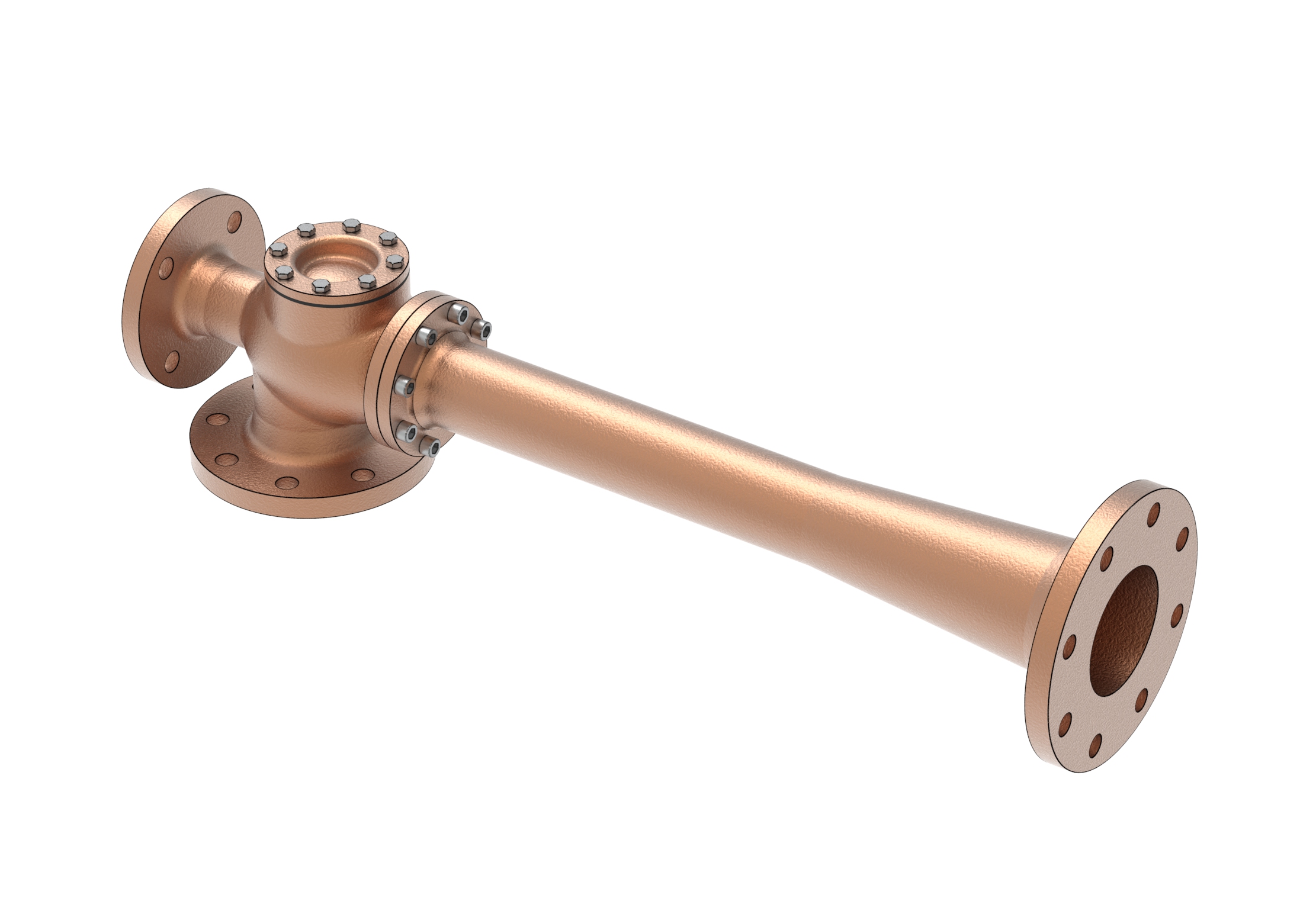 In my last article, I described how air conditioners and heat pumps waste energy by using throttle valves to expand the refrigerant. In theory, we could capture the expansion energy with a miniature turbine, turning it back into electricity and increasing the system efficiency. And doing this would be especially worthwhile for systems running on CO2 refrigerant, which has an unusually large expansion energy.

But it turns out there’s a smarter way to recapture that energy – with a device called an ejector.

The Magic of Ejectors

An ejector recovers energy from expansion and uses it to “pre-compress” the refrigerant before it enters the real compressor. This makes the compressor’s job easier, so it uses less energy to achieve the same result.

But more importantly for 2040 Energy, it allows a single compressor to operate across a dramatically larger range of temperatures.

Here’s how it works:

How an Ejector Works

There are four components to an ejector: 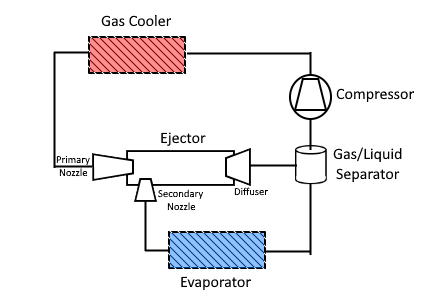 High-pressure refrigerant from the gas cooler enters the mixing chamber through the primary nozzle. This causes a nozzle effect: the pressure drops, but the flow velocity increases (just like water coming out of a garden hose nozzle). The overall energy of the refrigerant stays constant, so we have recovered the expansion energy.

The high-velocity refrigerant now exits the mixing chamber through the diffuser. This is basically a nozzle in reverse, slowing the velocity of the refrigerant while increasing its pressure. The diffuser output is a liquid/gas mixture – the liquid flows to the evaporator, and the gas goes to the compressor.

Overall, the effect of the ejector is to act as a second compressor.

The Ejector as a Second Compressor

If you’ve been following along with 2040 Energy so far, that “second compressor” part is the key. Thus far, our approach for creating a cold-climate heat pump is to use two separate (traditional, electricity-operated) compressors. Can we replace one of these with an ejector?

It turns out that we can! At extreme cold temperatures, the extra compression we get from the ejector is more than enough for us to run with a single traditional compressor. And the system will still be able to achieve our cold-weather goals.

By eliminating this extra compressor and the associated components, we will cut about $2,000 off our material costs. This is a big deal!

(I only wish I had figured this out sooner! I was aware of ejectors as an energy-saving component, but I didn’t really understand how they worked. It wasn’t until I dug into their inner workings that I realized what a benefit it would be for the 2040 Energy product.)

There are a few downsides to ejectors.

Nobody in the marketplace is selling ejectors off the shelf, especially for the design conditions that 2040 Energy needs. (A few companies sell ejector solutions designed for supermarket refrigeration, but these are not suitable for our needs.) If we want to use an ejector for our cold-climate hot-water heat pump, we’re going to need something custom-built.

Fortunately, ejectors are relatively straightforward devices. They have no moving parts, and their geometry is pretty simple. Once we know determine the sizing of the nozzles, mixing chamber, and diffuser, just about any metals fabrication company can build them for us.

But that brings up the second problem: it’s virtually impossible to design an ejector based on the desired specifications. There just isn’t a well-understood theory for how the component sizes and shapes affect an ejector’s performance at different conditions. The only way to design an ejector is “empirically” – meaning we will just have to keep trying different designs until we find one that works.

This will not be an easy or cheap process. Fortunately, there are a few engineering firms that specialize in this sort of thing.

Finally, one disadvantage to ejectors is that they only work well over a small range of conditions. An ejector that works well for the extreme condition of generating 160° water when it’s -40° outside is unlikely to work well in more moderate conditions (e.g. generating 100° water when it’s +40° outside). In the worst case, running an ejector at off-design conditions can lead to a “stall” condition where refrigerant flows backwards through the suction nozzle back into the evaporator – which will eventually cause the whole system to fail.

To get around this, we may need a “multi-ejector” – a system with several ejectors and a valve control system to activate the appropriate one based on the current conditions. This, of course, will add cost and complexity to the design. It remains to be seen if this type of system will be necessary.

Adding an ejector to the RenewaBoiler system design is going to make things a bit more difficult for us up front. But if we can make it work, the benefits far outweight the drawbacks. Frankly, it’s a breakthrough that might very well mean the difference between success and failure for our product.

One more step towards carbon-free heating!

We are building RenewaBoiler — the first cold-climate heat pump designed for hot water radiators. Product release is targeted for late 2023.

Stay in the Loop

RenewaBoiler is scheduled for release in late 2023. To keep up with our progress, sign up for email updates below. (We promise to respect your inbox!)